Sammy is a dead rat that belongs to Miss Mush. He ate her Mushroom Surprise which caused him to be dead. Despite that, however, he is perfectly capable of speech and movement, as seen when he wanders into class in a bundle of raincoats in his introduction chapter, and leaves rude comments about all of the students.

Sammy is a gray, dead rat. In his debut, he wears several stinky, dirty raincoats into the classroom. Underneath all of them, he hides, leaving crude comments about the other students.

While bundled in raincoats, Sammy acts awfully rude towards the other students, leaving mean-spirited comments about them. However, without the raincoats, Sammy doesn't seem to do much, appearing as an ordinary dead rat. However, Sammy's mere prescence can cause people to say the thoughts at the back of their minds, so Sammy still seems to have some sort of ability without his disguise.

Sammy as illustrated by Dennis Hockerman 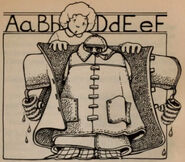 Sammy as illustrated by Julie Brinckloe 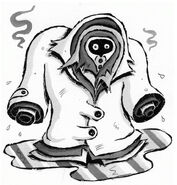 Sammy as illustrated by Adam McCauley

Sammy as illustrated by Peter Allen
Community content is available under CC-BY-SA unless otherwise noted.
Advertisement